Due to the recent economic downturn the credit risk situation of some major industries has deteriorated, and insolvencies are expected to increase. 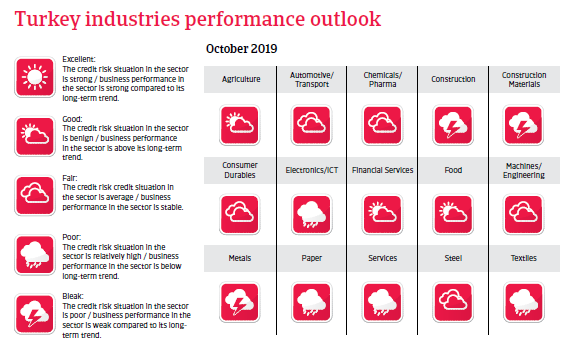 A new presidential system since 2018

President Erdogan won the June 2018 presidential elections in the first round, finally consolidating his overwhelming power, as with this voting the transition to the new presidential system has been completed. In the June 2018 parliamentary elections the alliance of Erdogan´s AKP with the nationalist MHP party won 53.7% of the votes. In the March 2019 local elections the AKP was again the party with the highest percentage in the voting, but the oppositional CHP won mayoral elections in several large cities.

The political divisions within the country persist, and the south-eastern part of the country remains affected by the civil war in Syria and cross-border interventions by the Turkish army. Relations with Western partners (EU, USA) remain strained.

The impact of the currency crisis and subsequent credit crunch

Real GDP decreased considerably in H2 of 2018, with a sharp currency depreciation and a subsequent credit crunch. While in Q1 and Q2 of 2019 the economy grew again on a quarter-to-quarter basis, it still shrank year-on-year (down 1.5% year-on-year in Q2). 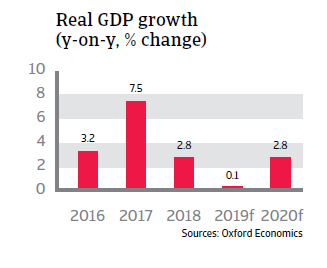 Despite the end of a technical recession, economic growth is forecast to level off this year. A sharp rise in unemployment and high inflation depressed private consumption in H2 of 2018 and early 2019. While household consumption has rebounded modestly since then, the contraction in fixed investments has continued to accelerate, as companies pay high interest rates for loans and are struggling with impact of the higher local currency value on foreign debt repayments. Geopolitical uncertainty and deterioration in institutional quality are also casting a shadow over Turkey’s business climate.

That said, net exports are sustaining the economy on the back of the weak lira and lower import demand. Additionally, recent loosening of monetary policy will provide some support for domestic demand. A modest economic rebound is expected in 2020. 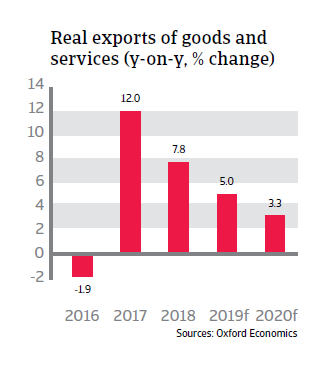 Due to the economic downturn the credit risk situation and business performance of many industries has deteriorated and business insolvencies are expected to increase by about 10% in 2019.

Payment delays and the probability of defaults have increased in the construction and construction materials segment due to considerable overcapacity, rising material costs, high interest rates for loans and declining credit for housing. Credit risk has increased in the retail sector, including the textile and fashion segment. Overcapacity, a low equity base, decreasing domestic and export demand and competition from East Asia are causing liquidity bottlenecks for retailers and wholesalers. The ratio of non-performing bank loans in this sector has increased to more than 8%.

The automotive industry suffers from weak domestic demand, high inflation and increased taxes, with production of both vehicles and spare parts decreasing. Businesses in the plastics and metals sectors have been highly vulnerable to payment defaults over the past three years and the liquidity situation remains generally weak. The ICT sector is exposed to above-average credit risk due to increased import prices and deteriorating consumer demand.

In 2019 and 2020 the budget deficit is expected to be above 2% of GDP, as the government continues to stimulate the economy. The public debt level will increase modestly to about 30% of GDP, but this excludes substantial contingent liabilities, such as state loan guarantees from earlier credit incentive programs. The public debt profile is relatively favourable with an average maturity of 6.3 years, and a high share at fixed rates.

However, as nearly half of public debt is denominated in foreign currencies this affects the risk of sovereign default. Issuance of new debt has also become more expensive, with Turkish 10-year government bond yields having spiked above 20% a couple of times.

The substantial reduction in the current account deficit is evidence of some economic adjustment. Exports benefited from the weaker Turkish lira while import demand decreased sharply. Recent monetary easing in the US could support the return of portfolio inflows to Turkey.

However, the annual external financing needs remain high at 22.5% of GDP, because it consists mostly of short-term repayment obligations of banks, while deleveraging in Q1 of 2019 was hampered by a state-induced lending push ahead of the local elections. Foreign direct investment inflow remains weak, and decreasing foreign reserves can only cover 40% of the external financing requirement.

Therefore, Turkey’s low-savings economy remains very vulnerable to bouts of capital flight. After a massive depreciation in 2018 the lira quickly  recovered, but it has shown renewed weakness in the run-up to the March 2019 local elections. Besides worries about multiple geopolitical risks and foreign reserves being even lower than official figures indicate, doubts about the independence of the Central Bank remain a major issue.

The government has repeatedly voiced its (unorthodox) view that high interest rates cause high inflation and has taken more control over the monetary policy. The Central Bank has lowered the interest rate by 4.25 percentage points in July and by 3.25 percentage points in September, citing improving inflation and a moderate improvement of economic activity. Additional measures were announced to revive bank lending, including the lowering of the required reserve ratio for banks whose loan growth is between 10% and 20%.

Despite a recent decrease, the level of external debt, which is mostly held by the private sector (banks and corporations), remains high at 185% of exports in 2019. Turkish corporates, particularly in the energy, construction materials, steel, transport (airlines) and chemicals sectors have extensively borrowed in foreign currency from local banks. Some companies restructured their external debt and the debt service burden has decreased, but liabilities still remain high and sensitive to interest rate, rollover and exchange rate risks.

Banking system stable so far, but susceptible to refinancing risk

The Turkish banking sector has hitherto been generally well regulated and capitalized. Turkish banks are not directly exposed to foreign exchange risk, as they are not allowed to carry significant open foreign exchange positions. However, they could be indirectly affected by another sharp lira depreciation: Either via higher non-performing corporate sector loans or difficulties refinancing the substantial amount of short-term foreign exchange funding that Turkish banks rely on to extend domestic credit.

The non-performing loans ratio has increased to 4.6% from 3.0% a year ago while provisions are made for about 70% of these bad loans. However, banks’ access to short-term foreign funding has become more fragile, as unorthodox policy measures by the Central Bank in order to stem the exchange rate volatility have eroded trust in the Turkish financial system (Prior to the March 2019 local elections the Central Bank temporarily suspended liquidity auctions, trapping international investors in unfavourable lira positions).

Without comprehensive reform efforts beyond fixing short-term issues the future earnings capacity of the Turkish economy remains constrained by macroeconomic imbalances related to high credit growth, high inflation and a large external deficit. This is coupled with structural issues related to its low savings rate and weaknesses in competitiveness, limiting FDI inflow.

The investment climate is also hampered by a weak judicial system and an inflexible labour market. Moves to privatise state banks and the power sector are also proceeding too slowly. Without structural reforms to raise savings, reduce dependency on energy imports and improve the investment climate, Turkey´s potential growth rate will decrease to 3% - 3.5% per annum - not enough to absorb the increase in the working age population of about one million people per year. 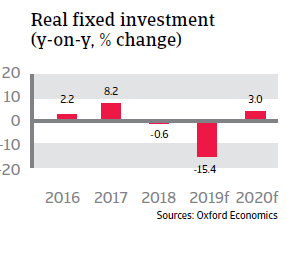 In 2020 household consumption is expected to accelerate, sustained by further decreasing unemployment, low inflation, and a minimum wage increase.

Financial conditions in Turkey will be tighter in the coming months.