GDP is forecast to grow about 3% annually, driven by higher oil prices, investments and consumption, but concerns about the fiscal deficit remain an issue. 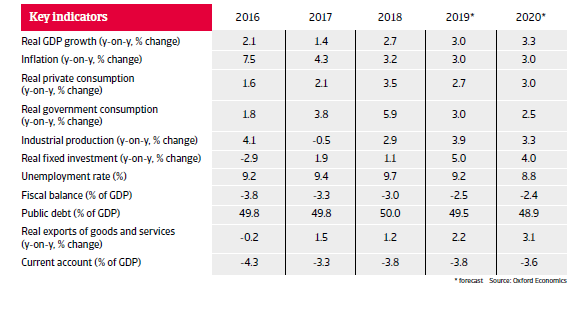 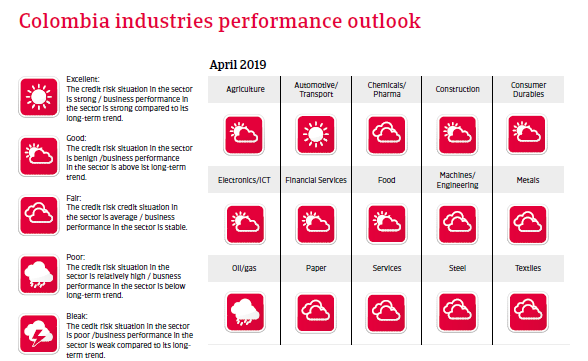 After several years of negotiations, in December 2016 a peace accord between the Colombian government and the main guerrilla group FARC was finally signed. In August 2017 most FARC rebels demobilised and handed over their last weapons to UN representatives, and the government declared the 52 year-old armed-conflict formally over. However, the peace process faces major challenges, as the former FARC guerrillas struggle to integrate into society, and some parts of the peace accord remain controversial (e.g. impunity for former FARC members). President Duque takes a tougher stand on those issues than his predecessor, while the government in early 2019 suspended talks with the smaller Ejército de Liberación Nacional (ELN) guerrilla group after several bomb attacks.

The relationship with the Maduro government in Venezuela remains strained, and over the past two years more than one million Venezuelans have fled to Colombia.

In 2019 and in 2020 the economy is forecast to grow about 3% annually, driven by higher oil prices, investments and consumption. The mining industry should see steady growth over the coming years, supported by competitive coal exports and growth in gold production. In recent years, sound economic policies have contributed to higher earnings capacity and economic resilience, and the new government under President Duque has continued with a business-friendly policy agenda. Inflation is expected to remain stable at around 3% in 2019 and in 2020, firmly within the central bank’s target range. 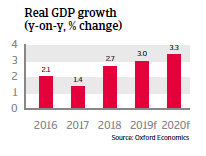 Concerns about Colombia´s fiscal deficit and narrow revenue base remain an issue, and led some major rating agencies to revise their rating outlook for Colombia in 2018. In December 2018, Congress passed legislation increasing income taxes on high earners, reducing corporate taxes and taking additional measures against tax evasion. However, a politically controversial increase in value-added tax on basic food was opposed, and it remains to be seen if the government can meet its fiscal targets, which aim to cut the deficit to 2.4% of GDP in 2019 and finally to 1% of GDP by 2027. 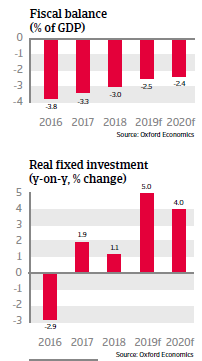 The bright outlook presented in May has proven true but clouds are quickly gathering on the horizon. In an increasingly uncertain environment, there is no room for policy mistakes.

The Americas - an increase of overdue B2B receivables

The percentage of overdue B2B invoices increased in 2018 impacting 64.1% of survey respondents in countries surveyed in the Americas.

The economic recovery in emerging market economies is expected to continue strengthening in 2018 and these markets could present opportunities for business.