Greece: heavily impacted by past due B2B invoices

Despite already posting the highest proportion of uncollectable receivables in the region, Greece’s average rose to 2.8% in 2018 from 2.5% in 2017.

Despite a relatively low percentage of companies reporting late payments by B2B customers, the impact on suppliers in Greece has been more severe than in other countries. A high 30.1% of Greek respondents of the 2018 Atradius Payment Practices Barometer survey said that the main consequence of payment delays was lost revenue. 24.1% said that to manage the impact of overdues, they needed to take specific measures to correct cash flow and 18.1% that they needed to delay investments in property, plant and equipment. Greece had the highest percentages of respondents who pointed to insufficient availability of funds as the main reason for payment delays. After a decrease in the 2017 survey, the proportion of uncollectables increased again in 2018 and remains the highest of the countries surveyed in the region. 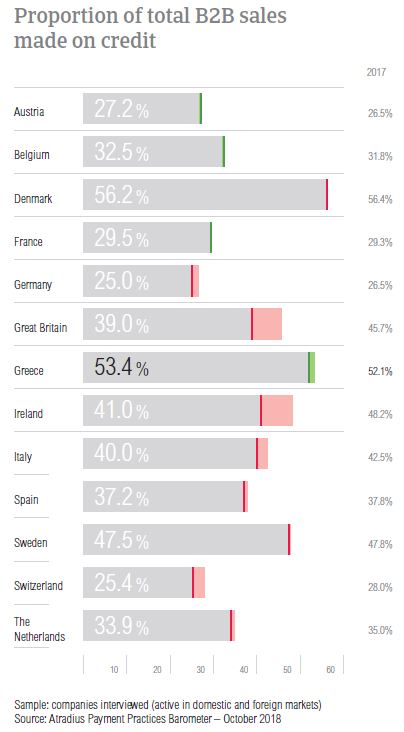 Similarly to what was observed in previous surveys, respondents in Greece are very inclined to trade on credit with their B2B customers. In 2018, the proportion of B2B sales transacted on credit increased slightly to 53.4% from 52.1% in 2017. Domestic B2B transactions are more likely to be on credit: 66.9% of B2B transactions on credit are domestic versus 39.9% that are foreign.

Similarly to what was stated in the region overall, the main reasons for granting trade credit in Greece are solid relationships with trusted B2B customers and the desire to gain more customers domestically and internationally. Credit sales also seem to be considered common practice in the industries with which the survey respondents operate.

We grant trade credit when there is trust and long-term cooperation. We also sell on credit to large and reliable businesses that are not part of our customer base

We have long-term customers and granting credit so far has led to successful cooperation.

A higher proportion of overdue invoices and a higher DSO

Despite an increase of almost six percentage points, at 72.0%, Greece has the lowest percentage of respondents who reported late payments by their B2B customers. Payment delays occurred far more often with domestic B2B customers than with B2B customers abroad (89.4% versus 54.6%). 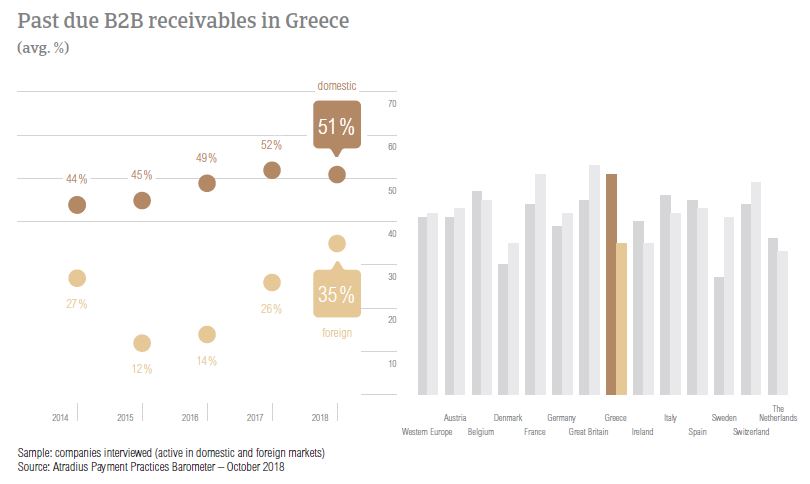 In 2018, the average Days Sales Outstanding (DSO) figure recorded in Greece is 61 days, one day longer than in 2017 and significantly above the regional average. 64.1% of respondents do not foresee any changes in their DSO over the next 12 months, however, 21.8% expect another increase.

The longest payment duration in the region

Confirming the above, 62.3% of Greek respondents said that they are more likely to give their domestic B2B customers a longer time to settle invoices. This contrasts with the overall survey pattern but is consistent with the patterns seen in Italy, Spain and Ireland. 34.2% of Greek respondents said that they are not likely to differentiate between domestic and foreign payment terms and only 3.5% that they are inclined to give their domestic B2B customers shorter payment terms. The main reasons for differentiating payment terms in Greece are internal policies, the financial risk related to the export transaction, industry practices and the economic situation in the customer’s country. 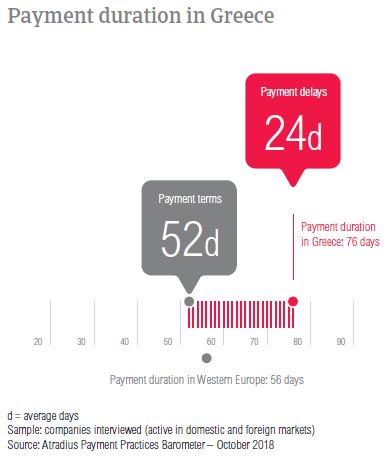 The changes in payment terms and payment delays influenced the average payment duration in Greece. This stands at 76 days, eight days shorter than one year ago. Despite the decrease, Greece still has the longest payment duration in the region. Compared to their peers in Western Europe, Greek respondents need about 20 days longer to convert B2B invoices into cash.

30.1% of Greek respondents said that overdue B2B invoices led to revenue loss over the past 12 months. This is the highest percentage of respondents who reported this consequence in Western Europe, much higher than the regional average of 16.8%. Due to overdue B2B invoices, 24.1% of suppliers in the country needed to take specific measures to correct cash flow and 18.1% needed to delay their investments in property, plant and equipment. 45.8% of Greek respondents said that over the past 12 months, overdue invoices did not have a significant impact on their businesses.

The majority of Greek suppliers do not use electronic invoices

The majority of respondents in Greece (53.0%) said that they are not using online invoicing with their domestic and foreign B2B customers. A lower 43.0% said that they have moved towards the online environment and another 4.0% expressed their intention to do so in 2018. Of the Western European countries surveyed, Greece had the highest percentage of respondents (65.9%) who said that e-invoicing did not have a noteworthy effect on payment duration. 32.9% of respondents said that after they invoiced their B2B customers online, they noticed an improvement and faster invoice payments. In contrast, a low 1.2% noticed a slowdown in payments.

Most concerned about the impact of geopolitical risk on global growth 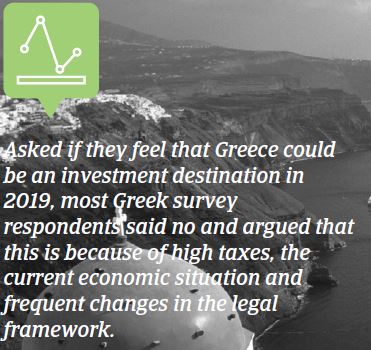 The highest proportion of uncollectable receivables in Western Europe

Despite already posting the highest proportion of uncollectable receivables in the region, the average rose to 2.8% in 2018 from 2.5% in 2017. 2.7% of domestic B2B receivables and only 0.1% of receivables  from foreign B2B customers were written off as uncollectable.

Uncollectable receivables in Greece originated most often from B2B customers in the chemicals, construction, consumer durables, food, business services and services sectors. The main reason why B2B receivables were uncollectable was bankruptcy. 64.6% of respondents stated this reason, an increased percentage compared to 61.0% in 2017. Other frequently cited reasons for write-offs are the old age of the debt (47.2%) and the failure of collection attempts (38.6%).

As mentioned before, in 2018, the average payment terms given by Greek respondents stand at 52 days and are the longest in the region. Despite this, B2B customers in the textiles and machines sectors enjoyed even longer average payment terms (91 days and 89 days respectively). In contrast, B2B customers in the business services sector are being asked to pay much faster (on average, within 45 days).

Despite being granted average payment terms of 84 and 71 days respectively, B2B customers in the consumer durables and the chemicals industries were some of the slowest to settle their payments, 25 days and 33 days late, respectively. Greek respondents said that the main reason for payment delays in both these sectors was insufficient availability of funds (86.0% of respondents mentioned this in the consumer durables sector and 74.0% in the chemicals sector). 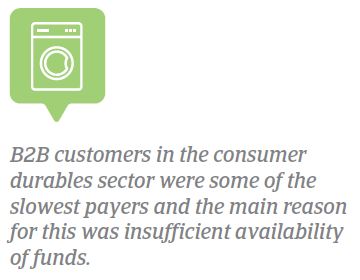 The global economy is in an upswing based on broad-based economic growth and still-low interest rates, but we are reaching a turning point.

Having drawn from the expertise of Atradius Collections' local offices, the International Debt Collections Handbook explains the different regulations and procedures for debt collections in Greece.

Pound sterling depreciation in the aftermath of the Brexit referendum in June 2016 has had significant impacts on UK-EU trade flows.