The UK is facing the highest increase in insolvencies in 2019 and 2020 in Western Europe.

Our forecast points to a 10% rise in insolvencies this year, with and a 5% increase in 2020. This forecast is based on a meagre 1.4% expansion of the economy, which would put upward pressure on the number of business failures.

Based on survey findings in the United Kingdom, respondents transacted 56.1% of the total value of their sales to B2B customers on credit (up from 38.6% last year). This compares to  60.4% for Western Europe. The increased use of trade credit in B2B transactions by UK businesses is primarily a reflection of the current economic and insolvency environment. Suppliers interviewed in the UK are offering credit terms to increase and retain sales, and to provide B2B customers with short-term financing, during a period of liquidity constraints. 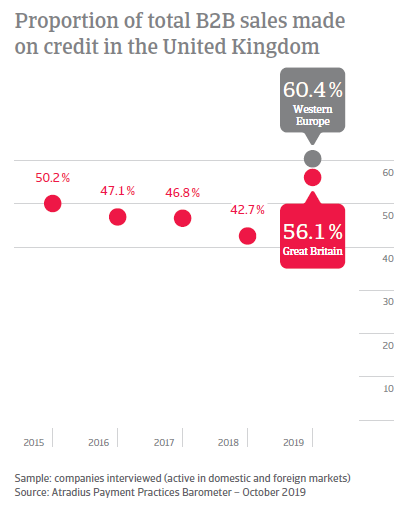 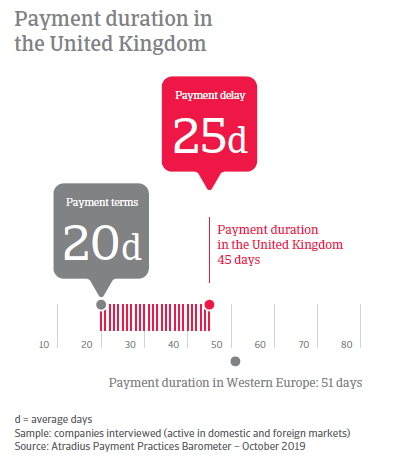 Average payment terms in the UK are shorter than last year

Average payment terms in the UK stand at 20 days from invoicing, down from 24 days last year and considerably lower than the 34 days average for Western Europe. UK survey respondents seem to be more reluctant to give B2B customers longer to pay invoices compared to one year ago. The reluctance is likely to be attributable to uncertainty over trade policy, higher global financial headwinds and the current economic situation. Which are also expected to cause a significant upsurge in business insolvencies in the UK (+10%) - amid rising labour costs and Brexit-related uncertainty. Longer payment timings could increase the risk of not being paid by customers on time, due to the expected worsening of payment practices over the coming months.

In the UK, extending trade credit is perceived to be more risky than last year

UK respondents focus on managing receivables through a balanced mix of credit management techniques, including trade credit insurance and self insurance. This is consistent with the increased use of customer credit along with tighter payment terms, signalling a stronger perception of credit risk in a challenging trade environment.

35.1% of the total value of B2B invoices issued by respondents in the UK over the past year remained outstanding at the due date. However, there was a small increase in the percentage of invoices paid on time (60.5%, up from 54.3% one year ago). The survey highlights that UK respondents turn overdue invoices into cash earlier than last year (on average within 44 days from invoicing, down from 54 days last year). This variation is in line with observations for the region overall, where payment duration decreased on average to 51 days down from 57 days last year. Despite their sharp focus on receivables management, far fewer respondents in the UK (26%) than in Western Europe (42%) reported no significant impact on business arising from late payments from customers. However, notably more respondents in the UK (48%) than in Western Europe (28%) needed to delay payments to their own suppliers: 41% of UK respondents (compared to 26% in Western Europe) needed to take specific measures to make up for liquidity constraints arising from untimely settlement of invoices. Compared to the same survey period one year ago, UK respondents appear to be less efficient when it comes to the collection of long-term overdue invoices. Survey findings reveal that the proportion of write-offs of uncollectable accounts increased to 2.5% (up from less than 1.5% last year). This compares to a 2.2% average for Western Europe.

Overview of payment practices in the United Kingdom

Based on survey findings in the UK, the agri-food sector is offered the shortest payment terms with an average of 14 days to settle invoices. The longest payment terms to B2B customers are found in the ICT/electronics sector (on average 27 days from invoicing). Average payment terms across the other sectors surveyed in the UK range from 26 days in the metals sector, to 17 days in the transport sector.

With an average of 39% of the total value of invoices remaining outstanding at the due date, the ICT/electronics sector in the UK has the greatest proportion of late B2B payments. Across the other sectors surveyed, the percentage of overdue invoices ranges from an average of 37% in the construction sector to 26% in the chemicals sector. The credit risk trend in the UK’s ICT/electronics sector deteriorated over the past year, due to a sizeable decrease in the proportion of timely payments (55.9% of invoices paid on time compared to 57.4% last year).

The UK ICT sector records the highest proportion of write-offs

Consistent with the deterioration of customers’ payment practices, the ICT/electronics sector in the UK recorded the highest proportion of B2B receivables written off as uncollectable (3% up from 1.2% last year). The transport sector recorded the same proportion of write-offs (up from 1.5% last year). Across the other sectors surveyed in the country, the percentage of receivables written off as uncollectable ranges from an average of 2.5% in both the construction and the agri-food sectors sector to less than 1% in the consumer durables sector.

UK large enterprises appear to be markedly less successful than last year when it comes to collecting long overdue payments (over 90 days past due). The proportion of B2B receivables written off as uncollectable amounts to 3.5% of the total value of invoices, (up from 1.9% last year). SMEs record an average of 2.6% of receivables written off as uncollectable, (up from 2.0% last year), and micro enterprises are at less than 1.5%, (up from less than 1% one year ago).

Alun Sweeney, Atradius Country Manager for the United Kingdom and Ireland commented on the report:  “Survey results for the United Kingdom point to a business environment continuing to face many challenges, most notably an expected increase in insolvencies over the coming months, which is forecast to be significant and adversely impact business investments.

Within the challenging environment, survey respondents appear to have offered a greater level of customer credit compared to last year, both as a means of strengthening long term trading relationships, and also providing liquidity directly to their B2B customers in times of liquidity shortages.

However, when it comes to getting paid, suppliers surveyed in the UK set much shorter average terms than their Western European peers demonstrating a strong focus on receivables management in challenging economic times. To safeguard cash flow, protect liquidity and minimise some of the financing costs arising from selling on credit, UK suppliers are also more likely than others to offer early payment discounting.

Looking ahead, the terms of future relations between the UK and the EU remain uncertain and UK suppliers anticipate a further deterioration of the risk climate. It is not sufficient to approach trade credit with prudence, it is important to manage trade credit strategically to grow business safely and most importantly in a profitable manner”.

British business insolvencies are expected to increase by more than 5% in 2019, mainly affecting businesses active in the construction and retail sectors.

The amount of suppliers facing insolvency will increase further in the coming 2-3 years, as many will find it hard to adapt to changing market conditions.